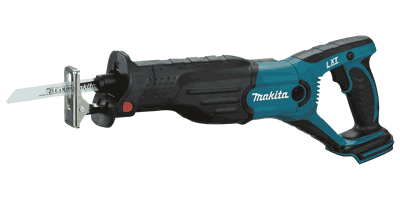 Makita’s 18V LXT® Lithium-Ion Cordless Reciprocating Saw (model XRJ02Z, tool only) delivers faster cutting and demolition performance to the jobsite. The XRJ02Z has a high torque motor with a 1-1/8” stroke that is engineered for a range of cutting and demolition tasks. The LXT® Lithium-Ion Battery (sold separately) makes this reciprocating saw perfect for remote use, where running a cord is not an option.

For improved tool performance and extended battery life, Makita created Star Protection Computer Controls™. Star Protection is communication technology that allows the Star Protection-equipped tool and battery to exchange data in real time and monitor conditions during use to protect against overloading, over-discharging and overheating. For increased versatility, the tool can also be powered by Makita 18V LXT® and Compact Lithium-Ion batteries with the star symbol on the battery indicating Star Protection inside.

The XRJ02Z features a Makita-built high torque motor with a 1-1/8” stroke that cuts 0-2,900 strokes per minute (SPM) for faster cutting. The XRJ02Z has a maximum cutting depth of 5-1/8” for pipe, and 10” into wood (using a 12” blade). Productivity features include an electric brake, and a “tool-less” blade change.

Ergonomic Design in a Compact Size

The XRJ02Z weighs only 8.2 lbs. (with battery, sold separately) with a more compact design at 19-5/8” long and an ergonomic shape that fits like a glove for reduced operator fatigue. In addition, the XRJ02Z has a built-in L.E.D. light to illuminate the work area, and a retractable hook so the tool remains close by but never in the way.

Versatile Design for a Range of Applications

The XRJ02Z is engineered for the pro that wants more features, and is perfect for a range of applications including plumbing, flooring, electrical, demolition, and for general contractors who require a best in class engineered cordless reciprocating saw.